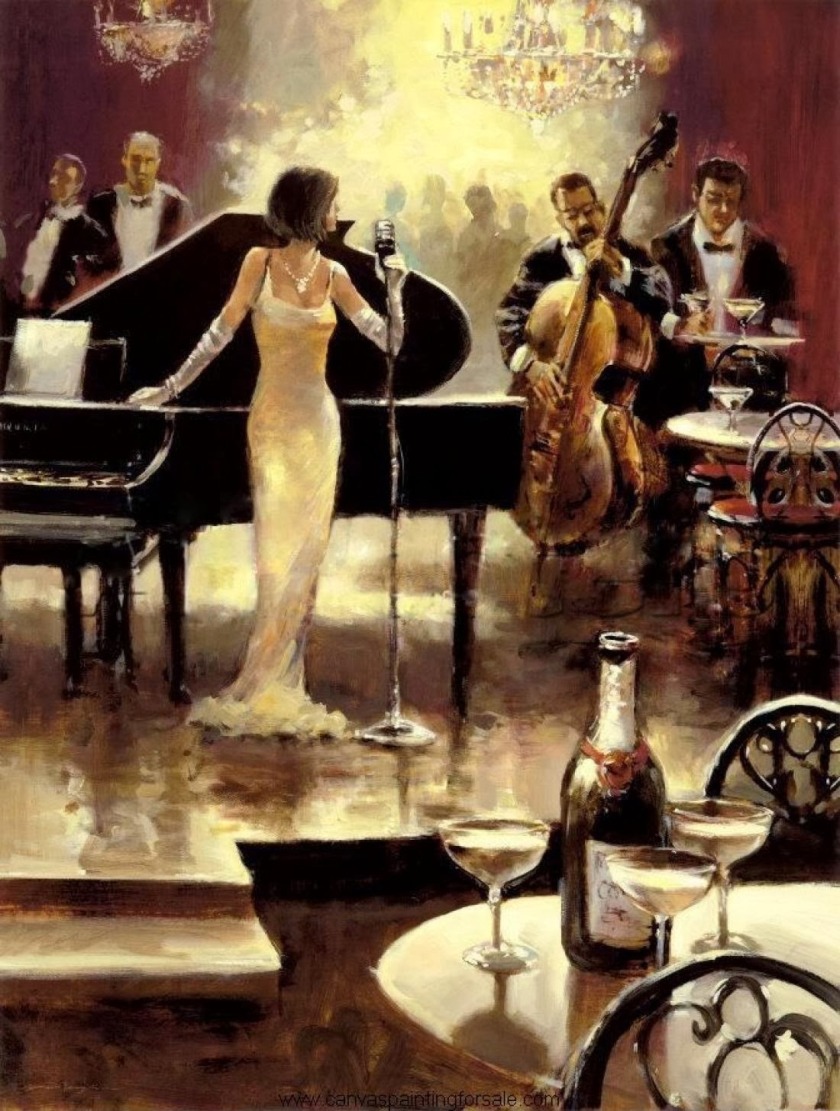 Have you ever put on some nice dress, a pair of heels and a beret and you imagined that you were in Jean-Pierre’s movie “Amélie?” You have a cup of coffee near you, some flowers on your table and a book in your hands, but all you are missing is some good music in the background.

Here are 10 incredible musicians that will take you on the streets of Paris, right in front of the Eiffel Tower with their music.

She is a French singer-songwriter. After spending her younger years in Erbray, Cherhal studied philosophy before moving to Paris. She started her singing career playing piano – solo, or accompanied by her guitarist Éric Löhrer in small concert venues. At the time she sported long, plaîtted hair. After a six-title CD, she released an album entitled “Jeanne Cherhal” with the independent label Tôt ou tard.
Here you can hear her sweet voice singing:

Paris Combo is a musical group based in Paris, France, fronted by the vocals of chanteuse Belle du Berry. The group has an eclectic style, blending elements from the traditional French chanson and pop, American jazz and swing, Roma music. They have performed live all over the world.The mainstream success of their second album Living Room (2000) gave the group a unique status as a French indie band capable of drawing crowds not only in France, where the album went gold, but also in Australia and the USA.

Amélie-les-crayons is a French singer-songwriter, with an emphasis on theatricality and humour in her performances and that of her group.
Here is one extraordinary music video from her:

He was a French singer, songwriter, pianist, film composer, poet, painter, screenwriter, writer, actor and director. Regarded as the most important figure in French pop whilst alive, he was renowned for often provocative and scandalous releases which caused uproar in France, dividing its public opinion; as well as his diverse artistic output, which ranged from his early work in jazz, chanson, and yé-yé to later efforts in rock, funk, reggae, and electronica. Gainsbourg’s varied musical style and individuality make him difficult to categorize, although his legacy has been firmly established and he is often regarded as one of the world’s most influential popular musicians.
Here you can listen to his charming “La Javanaise”.

She is a French singer-songwriter. She made her musical debut in the early 1960s. As a leading figure of the yé-yé movement, Hardy “found herself at the very forefront of the French music scene” and became “France’s most exportable female singing star”, recording in various languages, appearing in movies, touring throughout Europe, and gaining plaudits from musicians such as Bob Dylan and Mick Jagger. With the aid of photographer Jean-Marie Périer, Hardy began modeling and soon became a popular fashion icon as well. Hardy remains a popular figure in music and fashion and is considered an icon of French pop and of the 1960s. The singer is also considered a gay icon and has “repeatedly declared that her most devoted friends and fans are gay”. Several of her songs and albums have appeared in critics’ lists.  Hardy’s style is mentioned as inspiration for many fashion figures such as  Andre Courrèges, Paco Rabanne, Alexa Chung  and  Nicolas Ghesquière, former head of the couture house  Balenciaga and currently creative director of  Louis Vuitton.

Jacques Dutronc might be a cool name to drop when discussing debonair Gallic musical greats, but there is a surprising dearth of material written about him outside the Francosphere. In his home country he is a household name and the subject of countless biographies; elsewhere he is better known as Monsieur Françoise Hardy. (They started dating in 1967 and married in 1981, and though still married they are now separated.) The Parisian’s ascent to teen idol status wasn’t overnight. He burst through as a positively ancient 23-year-old as the era of the yé-yé drew to its conclusion, charting with the garage R&B of Et Moi Et Moi Et Moi in 1966. Hitherto, he’d been known as a fine session guitarist for other artists such as Eddy Mitchell, Micky Amline and Gene Vincent.

Henri Texier is a French jazz double bassist. At the age of sixteen, fascinated by the double bass, Texier became a self-taught bassist, crediting Wilbur Ware most as an influence. He formed his first group inspired by the music of Don Cherry and Ornette Coleman. In spite of an almost absence of recorded documents this group represents one of the very first expressions of free jazz in France Throughout the 1970s Texier remained active in Europe on the jazz scene, performing with musicians such as Gordon Beck, John Abercrombie and Didier Lockwood among others. In 1982 he formed a quartet with Louis Sclavis.

Isabelle Geffroy , better known by the nickname Zaz, is a French singer-songwriter who mixes jazzy styles, French variety, soul and acoustic. She is famous for her hit “Je veux”, from her first album, Zaz, released on 10 May 2010. Zaz created the project Zazimut to “develop and promote projects for a society more respectful of life in all its forms”.
Here you can hear her international hit “Je veux”:

Barney Jean Wilen  was a French tenor and soprano saxophonist and jazz composer. Wilen was born in Nice; He began performing in clubs in Nice after being encouraged by Blaise Cendrars . In 1959, Wilen wrote his two soundtracks “Un Témoin Dans la Ville” and “Jazz sur scène”. Wilen returned to composing for French films in the 1980s and 1990s. In the mid-to-late 1960s he became interested in rock, and recorded an album dedicated to Timothy Leary. He also worked with punk rockers before returning to jazz in the 1990s. Wilen played with modern jazz musicians until his death in 1996. In 1987, French comic book artist Jacques de Loustal and author Philippe Paringaux paid homage to Wilen in their “bande dessinée” Barney et la note bleue (“Barney and the blue note”).
Here you can hear his “La Note Bleue”:

Édith Piaf  was a French singer-songwriter, cabaret performer and film actress noted as France’s national chanteuse and one of the country’s most widely known international stars.Piaf’s music was often autobiographical and she specialized in chanson and torch ballads about love, loss and sorrow. Her most widely known songs include “La Vie en rose”, “Non, je ne regrette rien”  “Hymne à l’amour” “La Foule”) and “Padam, padam…”.Since her death in 1963, several biographies and films have studied her life, including 2007’s Academy Award-winningLa Vie en rose—Piaf has become one of the most celebrated performers of the 20th century.
Here you can hear the most beautiful song in French: